the series Hearts in Hazard & Into Death

The Dangers for Spies


Past actions cause present dangers.

Eugenie DesChamps thinks she is safe, hidden in the English village of Little Houghton.  She paints landscapes to supplement her income.  She embarks on a flirtation with Charles Audley.  To her the world seems radiant, so very different from eight years ago.

No one knows that she once was a toast of Paris, a pretense she used to acquire information to pass on to English spies.  Eugenie hated the corrupt French government that had caused the deaths of her family.  When a French agent discovered her double game, she barely escaped with her life. 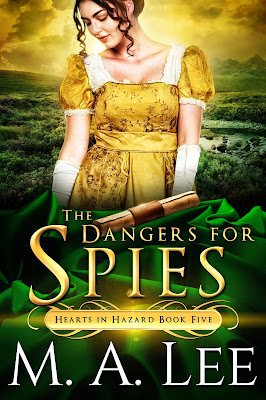 Eight years ago, Tobias Kennit worked with Eugenie, stealing information about Napoleon’s troop movements.  Then their operation crashed.  He fled, believing that Eugenie was executed as a traitor to her home country.  Toby abandoned his undercover spying and became a gamester and a rake.

Yet now the English spycatcher Roger Nazenby has approached Toby once more.  He wants him to protect a cryptographer living in the village of Little Houghton.  French spies have infiltrated England to capture Charles Audley and return with him to France.  Toby agrees to the assignment only because the woman he wants to marry (Melly Ratcliffe) lives in that village.

Charles Audley returned to his home village for peace and quiet after stressful years in London developing a series of ciphers for English agents.  His latest ciphers led to English victories in the Peninsular War.

In Little Houghton, he is charmed by Eugenie DesChamps, a mysterious French artist.  Their flirtation distracts him from his cryptography, but he feels no guilt whenever he is in her company.

When Toby sees Eugenie, he is shocked.  Eugenie is not dead, and he wants answers from a woman he thought was a double agent.  Is she in Little Houghton to help kidnap the cryptographer?  She convinces him that she is not—but who is the threat to Charles Audley?  And can they protect Audley when they do not know when or where the attack will strike?

French agent Didier Poulaine has spent eight years weaving together the snippets of threads to help him locate the only two spies who ever escaped him:  Eugenie de la Croix and an Englishman masquerading as a French military officer.  He tracks them to Little Houghton, the location of the cryptographer he came to England to kidnap—or kill.

Poulaine’s threads have woven together.  Three lives intersect again and involve a fourth.  Blood must be shed before the past is purged.  Whose blood?

The Dangers for Spies is a romantic suspense set in Regency England, part of the Hearts in Hazard series.  While this novel and The Game of Spies have interconnected characters, D4Spies is a complete work on its own.  However, readers will have a richer experience if they have also read The Game of Spies.

A baffling murder interrupts a charming romance in The Danger of Secrets . Too bad for Maddy and Gordon that secrets can kill. 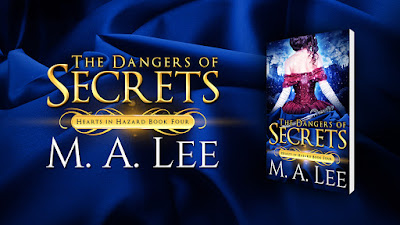